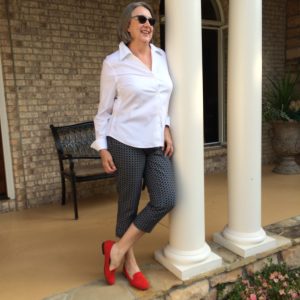 Rhea Footwear is stylish and practical

As a blogger I get a few requests a year to try a product and write a review of the product. Usually, I respectfully decline the requests for a number of reasons, not least of which is the integrity of my blog. However, when Natalie Rodriguez of Rhea Footwear contacted me, I felt that taking a look at her product would be a service to many of my readers as well as myself. You see, I experienced a slip and fall on September 29, 2015 — an experience I never want to repeat and I would not wish on anyone.

As we age, we are more prone to falling due to loss of muscle strength, balance and a host of other causes, including diseases such as diabetes, arthritis, Parkinson, even hearing or vision problems. Many accidents happen due to hazards in or around the home, which is exactly what happened to me.

It was a rainy night on my wet back porch.  I didn’t turn on the lights. I was only going to be a minute as I fetched the cats’ dish to take it in for the night. When I reached down to pick it up, I slipped, fell forward first to the right, then twisted to the left where my face hit the wet cement floor as my glasses pushed upward cutting my brow open. The thud from my fall was so loud, Martin came out to see what happened. Stunned, with blood pouring down my face, I couldn’t get up at first. Martin pulled me to my feet, helped me into the kitchen where I grabbed a wad of paper towels, scrunched them into a ball and pressed them to my bleeding head.

“I think I need to go to the emergency room,” I said.

Martin pulled the paper towel back for a look and said, “I think you do, too.”

We finally made it back home around 5 a.m. on September 30 after six and a half hours in the ER, five stitches, one CT scan, one tetanus shot and one black eye later. And, boy, did I hurt — all over. What a night! According to the CDC, one out of three people 65 or older falls each year. Falling once doubles your chances of falling again. As mentioned above, I don’t want to repeat this experience. I feel lucky nothing was broken, my brain was o.k. and all I have to show for it now is a scar just off my left eyebrow, along with a new pair of glasses. 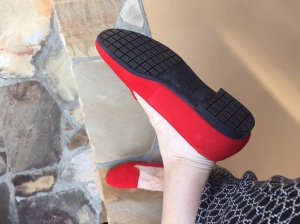 When Natalie contacted me touting Rhea’s patented non-slip outsole technology, I couldn’t resist taking a look. Yes, they sent me a pair — a really snazzy looking pair of red flats. Very stylish as well as practical. Rhea Footwear has a micro-tread pattern that pushes water in all four directions with a sole that grips.

I’ve been testing these velvety red flats the last couple of days and feel like I could have avoided six and a half hours in the emergency room if I had been wearing my Rhea’s. Instead, I’m a statistic — one of 2.5 million older adults who, according to the CDC, are treated in the emergency room each year due to a slip and fall accident. Rhea Footwear is engineered to minimize slip and fall accidents. Their NeverSlip™ outsole is made from an exclusive rubber compound that grips on most slippery surface conditions and has more traction than other soles even on ice and snow.

Since I don’t want my readers to ever experience the trauma of a slip and fall accident, I recommend Rhea Footwear AND Rhea has graciously offered a 20% discount for any reader ordering from Rhea using the promo code, KATHYSRETIREMENT! Click here
https://www.rheafootwear.com, use the code and tell them I sent you!

12 comments on “Prevent Slip And Falls With Rhea”

Kathy Merlino is the author of Kathysretirementblog.com, a blog about her perspective and thoughts on the emotional side of retirement and her journey as a caregiver. She is one of the most thought-provoking and influential writers on non-financial retirement topics. Kathy believes retirement is a journey, not a destination. I love to hear from readers! Leave a comment or Twitter:@kathysretiremnt