Oftentimes, my ideas for blog posts come from words spoken to me by someone I’ve met up with, a friend or one of my readers, hearing something on TV or reading an article. During the last few years I’ve heard many, many people comment about starting over when they retire. Some look forward to retiring with the excitement of entering a new venture. Others lament the idea after being forced to retire because of poor health, a spouse’s illness or an employer terminating their job position. Whatever the reason for retiring, we are all starting over, as we will many times in life.

A lifetime ago, I left one job for another job. A larger paycheck, less work and no travel. My then current supervisor, in an effort to keep me where I was, said, “I hate to see you start over someplace else, especially at your age.” Laughable today since I was a mere thirty-five at the time. I wasn’t sure if this was a scare tactic or a reflection of his regret since he had scrapped a position elsewhere, in his forties, to join the company and become my boss. Whatever it was, I didn’t fall for his line. Instead, I recognized then as I recognize now, we start over many, many times during our lives. We begin anew again and again.

Retirement leaves a void once filled by paid work. There are as many ways to fill that void as there are rain drops in a puddle. The trick is choosing the activities that are fulfilling to you. If you have a lifetime of hobbies and volunteer work in your quiver, you may have an easier time adding purpose back into your life.

Then, of course, there are those who did not choose retirement as much as having it chosen for them. It’s not unusual to experience grief for a lost way of life, a paycheck, work friends, daily routine. However, people who choose their retirement date most often feel the same loss. Acknowledging the loss and accepting the ensuing grief will eventually let you move on. Then you can embrace the opportunity before you.  The opportunity to grow, to prosper in ways other than money or promotions.

What makes you want to get out of bed in the morning? Stay active! In my unexpected role of caregiver, I’m starting over. Yet, I continue, for both our sakes, to find snippets of time to garden and write and do art. While Martin leans on me, I’ve learned to bank on my strengths. What are your strengths? I was always highly organized at work. Something I let slip in my early years of retirement. Now, I’m pulling that rabbit back out of the hat. I also put a huge value on my time and guard it with zeal. I find it easier to say no.

Create your retirement circle of friends. Once you retire, unless your current friends are also retiring, you may find you have less in common with them. Your schedule will no longer revolve around Monday through Friday work weeks. Every day is Saturday. I developed new friendships by taking classes. Common interests create a common bond. Volunteering at an organization whose good works you value is another great way to find other retirees to add to your network. This is the time to try new activities. If one doesn’t pan out, you’re free to go on to another. It’s not like failing at a job. New friends are waiting. Put yourself out there.

Starting over can be difficult. It can also be exhilarating, challenging you to try things you never thought of doing, to experience and savor the unexpected. Think about the other times in life when you started over. How did you feel? What did you do? Give yourself time. Retirement is a journey of discovery and change. It’s just one more opportunity to start over. 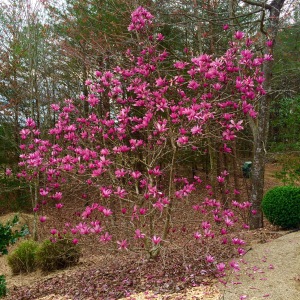 I live in the South. Spring arrived early this year with promises of sunny warm days and blooms galore. Spring is my favorite season as, to me, it heralds new beginnings. Traditionally viewed as a time of rebirth, spring lifts my spirits as trees bud, perennials poke out of the ground and hummingbirds arrive to take up their summer residence and raise another brood.

If you are retired, or not, this is the perfect time to start something new. If a New Year’s resolution didn’t stick, give it a second go round.  Or, choose an adventure, visiting a place you always wanted to see, but never took the time to go there. This may be the season to explore your creative side — yes, you are creative! Take up a new hobby or go to a class such as plein air (French for open air) painting. You’ll get to enjoy learning something new outside in the fresh air and make some new friends.

Speaking of outside, visit your backyard to plant a new tree or bush or flowers or prepare your summer garden. Feed the birds. Winter is not the season when birds are in desperate need of food; it’s spring when all the seed heads have been gobbled up by our winged friends and there’s little natural food available. I delight in watching the cardinals, Carolina wrens and black-capped chickadees flitting around the feed spread on a stone wall behind my house. If you live in an apartment or condo, hike a local trail or visit a neighborhood park or arboretum. Even if your spring is not as warm as mine, after a cold, snowy winter, a fifty degree day can be, well, a breath of fresh air.

Spring is also a time for clearing out the inside of the house, simplifying our surroundings to make room for lazy summer days. This is when I declutter to the nth degree. I don’t have a lot of knick-knacks to begin with but what I do have is further reduced — who wants to spend the summer dusting — not me. This is when heavy blankets and quilts are exchanged for summer weight duvets. Time for a deep cleaning of everything. Last week I went through my closet and clothing I hadn’t worn in the last year was delivered to Goodwill. Ditto for the garage storage closet. Clear the dust and clutter and open the windows on a warm sunny day. You’ll feel better.

Taking this time of rebirth to renew your spirit, your creativity and assess your surroundings will hopefully set the tone for the remainder of your year. Happy spring!

Kathy Merlino is the author of Kathysretirementblog.com, a blog about her perspective and thoughts on the emotional side of retirement and caregiverschronicle.com, the story of her journey as a caregiver. She is one of the most thought-provoking and influential writers on non-financial retirement topics. Kathy believes retirement is a journey, not a destination. I love to hear from readers! Leave a comment or Twitter:@kathysretiremnt